Halloween is Coming-How Will you Celebrate?

Like many other things this year, Halloween will be different.  I told my kids early on that they would probably not be going out trick or treating this year.  It saddens me some that they accepted this as if it was no big deal.  They have become so used to things being cancelled this year, that I feel it wasn’t even a blip on their radar, just another thing they wouldn’t be able to do. Which sadly has become the norm this year.  However, this doesn’t mean that we still aren’t doing something fun! 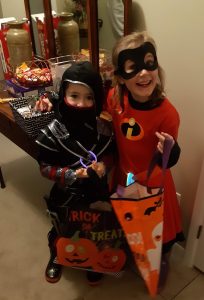 They excitedly and full of hope asked if we could still get pumpkins and carve them.  “Of course!” I said, feeding into their excitement.  I also told them I had something special planned for them this year which I think they are even more excited about.  This year, they are going to get dressed up like they always do (we went out and they have picked out costumes like any other year), and then they are going to do a candy hunt in the grandparents back yard.  I have flashlights for them, and they will run around trying to find the hidden candy in the dark.  Safe and socially distanced.  And we get to include the grandparents in an activity as I know they miss them dearly as well.

My point is, just because things are different, doesn’t mean that you can’t make memories. That is what I have been trying to do with my kids through all this. Make memories.  I guarantee that even as hard as this year has been for all of us, and all the things that had to be cancelled,  they will talk about the year they got to hunt for candy in the dark on Halloween for years to come! And that makes me smile.

As a licensed chiropractor, Dr. Frederick specializes in the diagnosis and treatment of a wide variety of conditions and disorders relating to the skeletal, nervous, and muscular systems. She believes firmly in treating the source of the problem rather than the symptoms alone. Dr. Frederick believes that education and proper communication is imperative to patient care. When people understand why their pain or dysfunction is occurring, it enables them to make the changes necessary to correct the problem at hand.